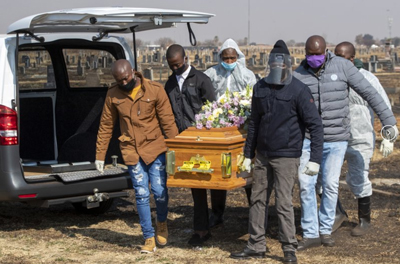 Family members and funeral workers in a protective gear, carry the coffin of nurse Duduzile Margaret Mbonane who died from COVID-19, during her funeral, in Thokoza east of Johannesburg, South Africa, Thursday, July 23, 2020. One of the country's nurses was buried Thursday, the latest of more than 5,000 infected health workers across South Africa. Mbonane died just a month before her retirement, her husband said. (AP Photo/Themba Hadebe)
By Cara Anna and Noobile Ntshangase
JOHANNESBURG (AP) — Global hot spot South Africa is seeing a “huge discrepancy” between confirmed COVID-19 deaths and an unusually high number of excess deaths from natural causes, while Africa’s top health official said Thursday the coronavirus is spreading there “like wildfire.”
A new report by the South African Medical Research Council, released late Wednesday, shows more than 17,000 excess deaths from May 6 to July 14 as compared to data from the past two years, while confirmed COVID-19 deaths have surpassed 6,000.
“The numbers have shown a relentless increase — by the second week of July, there were 59% more deaths from natural causes than would have been expected,” the report says.  Read more >>
Posted by Anthony Derek Catalano at 2:25 PM