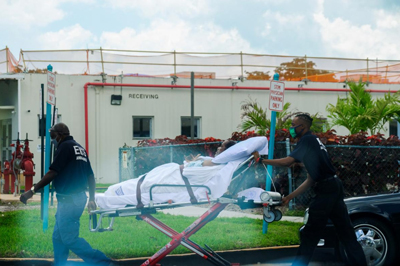 Emergency Medical Technicians (EMT) leave with a patient at North Shore Medical Center where the coronavirus disease (COVID-19) patients are treated, in Miami, Florida, U.S. July 14, 2020. REUTERS/Maria Alejandra Cardona
By Sharon Bernstein, Lisa Shumaker
(Reuters) - A half-dozen U.S. states in the South and West reported one-day records for coronavirus deaths on Tuesday and cases in Texas passed the 400,000 mark as California health officials said Latinos made up more than half its cases.
Arkansas, California, Florida, Montana, Oregon and Texas each reported record spikes in fatalities.
In the United States more than 1,300 lives were lost nation wide on Tuesday, the biggest one-day increase since May, according to a Reuters tally.
California health officials said Latinos, who make up just over a third of the most populous U.S. state, account for 56% of COVID-19 infections and 46% of deaths. Cases are soaring in the Central Valley agricultural region, with its heavily Latino population, overwhelming hospitals. The state on Tuesday reported 171 deaths.
Florida saw 191 coronavirus deaths in the prior 24 hours, the state health department said.
Texas added more than 6,000 new cases on Monday, pushing its total to 401,477, according to a Reuters tally. Only three other states - California, Florida and New York - have more than 400,000 total cases. The four are the most populous U.S. states.  Read more >>
Posted by Anthony Derek Catalano at 4:51 AM