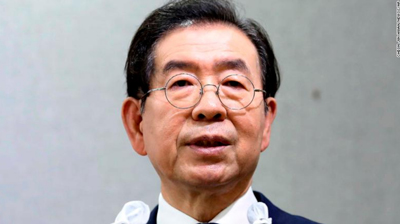 Seoul mayor Park Won-soon at a press conference on Wednesday, July 8.
By Yoonjung Seo, CNN
Seoul (CNN)The mayor of the South Korean capital Seoul has been reported missing and police have launched a search for him, an official told CNN on Thursday.
Park Won-soon was reported missing by his daughter, at around 5 p.m. Thursday (4 a.m. ET), according to a police official familiar with the case.
The 64-year-old longtime civic activist, who has been Seoul's mayor since 2011, is seen as a likely hopeful for the liberals in the 2022 presidential elections.
When Park was elected in a landslide victory against the ruling party nearly a decade ago -- with no political ties or experience -- it sparked a public frenzy. His unexpected rise to the second most powerful position in the country was seen as a sign that South Koreans were tired of traditional politics.
The former human rights lawyer, who ran independently but forged an alliance with opposition parties, championed city welfare projects and became a symbol of reform.
He was reelected as mayor in 2014 and again in 2018.
This is a developing story.  (source)
Posted by Anthony Derek Catalano at 8:13 AM