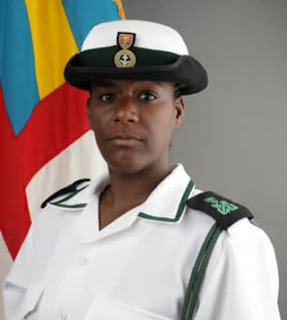 Christina Rahming, Petty Officer
Today on Who’s Who Wednesdays, we highlight a young Senior Enlisted who has had to overcome personal barriers in her life, and is now performing her duties par excellence as a seasoned seaman on the Royal Bahamas Defence Force.
Encouraged by her father to seek sound employment, Petty Officer Christina Rahming saw a notification in the newspapers asking for Defence Force applicants. Without hesitation, she dared to make a difference, applied and subsequently was accepted to join the nation's most prestigious organization on March 17, 2003 as a proud member of the combined Entry 38 /Woman Entry 10.
While attending High School, Petty Officer Rahming blended in with her peers. However, it was observed that something was amiss. After having to repeat grades, her parents learnt that their baby girl Christina had a condition called dyslexia. This now meant that she had to attend Blairwood Academy, a school which had the resources for students needing specialized teaching. Despite the odds stacked against her, she overcame this hurdle and successfully completed both her high school and tertiary education, attaining an Associates of Arts Degree in Journalism from Success Training College.
After completing Basic Entry Training, Rahming was drafted to the Public Relations department, where she was assigned duties of a photographer and writer. Over the course of her career, she has also worked in the Administration and Headquarters Departments, and at the National Emergency Management Agency (NEMA) Headquarters. In the Squadron Department, she has served aboard HMBS BAHAMAS and is currently assigned aboard HMBS NASSAU. Rahming has enhanced her skills on the patrol craft, in a diversity of capacities, including deckhand and radio operator. Her current duties include bridge writer and administrator.
As a seaman, she loves the salt life, which she says gives her a peace of mind. A recipient of the 2011 Marine of the Year Award, she fondly recounts an incident aboard HMBS BAHAMAS. A great many of her watchmates were experiencing sea sickness and she was called upon to be the helmsman for a few hours. Because of her physical challenge (being short!), she was forced to kneel in the chair to steer the craft comfortably in the nasty weather conditions. A funny one indeed.
Married to Devaughn Rahming for 11 years, this energetic and charismatic individual is not afraid of risk taking. One who is serious about her physical fitness, she loves the gym, is an avid weight lifter and gets in her cardio with daily runs. Her husband refers to her as a ‘Workout Junkie’. As a member of the Royal Bahamas Defence Force, one has to maintain a regiment of physical fitness in order to perform their daily duties in guarding the territorial waters of The Bahamas. This, along with maintaining a healthy lifestyle is what motivates Rahming to keep in shape.
She lists a number of females in the organization who has contributed to her success as a Senior Enlisted. As a Recruit, she reflected back on instructors such as Chief Petty Officer Rhoda Cleare (retired) who demonstrated to her how not to show any fear in the line of duty, and to always take life seriously.
Throughout Rahming’s career, she credits Force Chief Petty Officer Linda Knowles-Charlow, Chief Petty Officers Linda Allen (Retired) and Yvette Minnis, and Petty Officer Shamarah Lloyd-Pitt for sowing seeds of encouragement, motivation and confidence into her life. These individuals, among others, assisted in imparting to her, words of wisdom and guidance.
One significant accomplishment Rahming cherishes is that of being advanced to a Senior Enlisted. According to her, she does not take lightly the rate of a female Petty Officer, because she sees it as an opportunity to work hand in hand with her male counterparts.
As she reflects on her naval journey, she has no regrets. She has been able to transform her obstacles into opportunities and her challenges into chances.
“I have no regrets, because everything happens for a reason”, said Rahming. “If I were to change anything, then I wouldn’t be the person I am today”. She confidently asserts, “I am an energetic, charismatic and hard-working woman”.
Petty Officer Rahming recalls her 17 year journey and encourages her shipmates to: “Dig deep within yourself. Don’t fall under influences and pressures. Know your worth so that you may be able to take control of your career by doing what you know you are destined to do, instead of what others think you should do”.
Posted by Anthony Derek Catalano at 6:53 AM