Rolle says RBPF is in need of about 300 constables 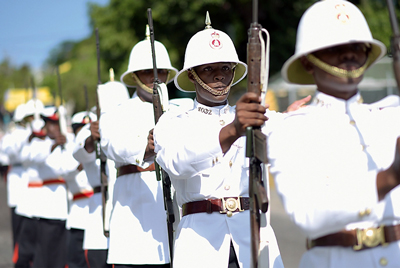 In his file photo, members of the Royal Bahamas Police Force march along East Street towards Annex Baptist Church for their annual church service in January.
By Rachel Scott
Commissioner of Police Paul Rolle said yesterday that the force is in need of about 300 constables in order to avoid an impending vacuum in the lower ranks.
“Right now, I need about 300 constables,” he said while delivering the keynote address during a combined law enforcement intelligence course that was being held at Police Headquarters.
“[T]hat will give us a cushion for a couple of years.”
Rolle added, “Many of us who joined in the ‘80s, the clock is running. I recall, when I graduated, there was a period of about four to five years when there was no recruitment.
“That’s what is the scary thing for me right now, because there’s going to be almost an avalanche when those in my era leave. And so, if we don’t act now, we are going to have a big vacuum, which is going to be almost 250 to 300 officers.
“And so, to head that off, I’m trying to fix it because I know it’s coming and you’ll see that in about two to three years.”  Read more >>
Posted by Anthony Derek Catalano at 9:06 AM