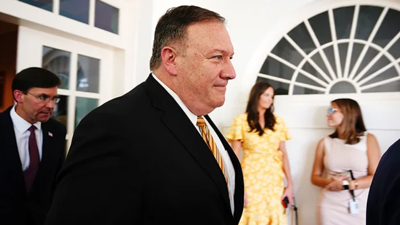 Secretary of State Mike Pompeo
By Laura Kelly
More than 30 faith leaders on Monday issued a warning against Secretary of State Mike Pompeo’s new push to put property rights and religious freedom at the forefront of American diplomacy.
In a statement, faith leaders across denominations warned that Pompeo’s push for a hierarchy of rights with religious freedom at the top “will weaken religious freedom itself and undermine respect for and damage the protections of the universal values of human dignity.”
The statement was led by the Center for American Progress, a nonpartisan progressive policy institute, and signed by leaders from the Catholic, evangelical, Jewish, Muslim, Sikh and Buddhist faiths.
The statement came in response to the secretary’s recent unveiling of a draft report by the State Department’s Commission on Unalienable Rights that defined human rights as a hierarchy with property rights and religious freedom at the top. Critics worry the report will set the groundwork for how the agency will prioritize monitoring human rights abroad.
Pompeo had created the commission to reexamine how the U.S. defines human rights, relying on texts from America’s founding like the Declaration of Independence and the 1948 U.N. Declaration of Human Rights.
But Democrats and human rights organizations have criticized the commission and its report as rolling back human rights protections for LGBTQ individuals and a woman’s right to an abortion.  Read more >>
Posted by Anthony Derek Catalano at 8:18 AM