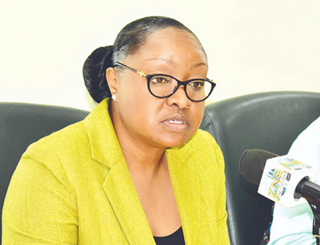 Supt. Terecita Pinder
By FN Reporter Jaimie Smith
Officers of the Northern Division of the Royal Bahamas Police Force (RBPF) made a number of arrests, 20 in total, over a six-day period, of persons found to be in violation of the Emergency Power Orders 2020, here on the island of Grand Bahama.
Many of those arrested were engaged in the selling of products or services, while others were arrested and\or warned of prosecution while on the streets of Grand Bahama during the island’ lockdown. The island wide lockdown commenced on Thursdaym, July 23, beginning at 7:00 p.m.
According to Press Liaison Officer Superintendent Terecita Pinder: “Three males were arrested in the Eight Mile Rock community. They were found in breach of the Act by officers. One of the males was arrested when he was found selling alcoholic beverages from his residence.
In the area of the Central Division, officers arrested four males, two of whom were found operating a barbershop during the lockdown period, while the other males were arrested on the streets for drug possession.
Pinder also informed that “a male was also arrested on Sunday, July 26, shortly before 11:00 a.m., for breach of the Emergency Order Act 2020, when he was seen on the streets driving a vehicle by officers on patrol.”
Upon seeing the officers, in an attempt to evade authorities, the driver of the gray Honda vehicle, then fled at a high rate of speed. He lost control and crashed into bushes in the area of Midshipman Road.
While his injuries were not life threatening, the Honda vehicle received extensive damages.
The driver was subsequently taken to the Rand Memorial Hospital where he was seen by doctors. He was warned of prosecution and will be arraigned before the Magistrate Court.  Read more >>
Posted by Anthony Derek Catalano at 5:02 AM