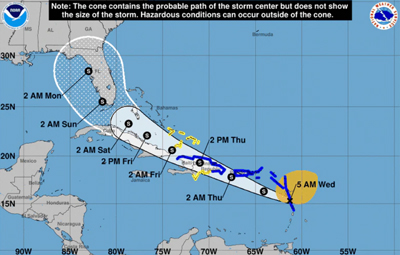 image via
By Jasper Ward
The southern Bahamas can expect a tropical storm warning as early as this morning, according to Senior Deputy Director in the Department of Meteorology Jeffrey Simmons.
A tropical storm watch has already been issued for Puerto Rico, the Virgin Islands and the Leeward Islands as a broad area of low pressure east of the Lesser Antilles continues to strengthen.
“We’re looking at this to become a tropical storm, to develop into a tropic storm some time during tonight,” Simmons told The Nassau Guardian yesterday.
“Should it survive this hostile environment, it will remain as a tropical storm and start moving through The Bahamas starting Friday morning, early Friday morning in the southern Bahamas.”
Simmons said the storm will move through the archipelago on Saturday night.
“We can start to issue alerts definitely by early tomorrow morning for the southern Bahamas,” he said.
Simmons said The Bahamas should prepare for tropical storm weather this weekend.
“From those types of systems, you often get more rainfall than anything else,” he said.
“And then, with rainfall comes the flooding. Also, there could be some localized flooding in some areas.”
Simmons said these projections were based off data released at noon yesterday.
Earlier yesterday, he told The Guardian that projections at the time indicated that the storm would develop into a Category 1 or 2 storm by the weekend.
At the time, Simmons said, “The only issue we have right now is putting a good track on it in terms of saying to any particular island that they would be impacted, how they would be impacted and when.”
He urged residents of The Bahamas to not dismiss the storm.
Simmons called on them to go into alert mode.
“Nevertheless, even if it’s a tropical storm, there could be a lot rain and the wind may not be as strong and storm surges but still I would advise, as we do all during the hurricane season, for persons to be alert,” he said.
“Seeing this system approach, my advice would be to prepare.”  (source)
Posted by Anthony Derek Catalano at 8:22 AM