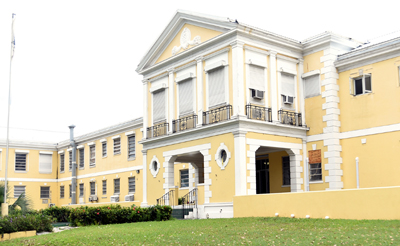 The Princess Margaret Hospital
By Jasper Ward
Roughly 50 patients were potentially exposed to COVID-19 across three wards at Princess Margaret Hospital (PMH) in the last week, The Nassau Guardian can confirm.
None of the wards, which include the Male Surgical Ward and Female Medical Ward I, are accepting new admissions, this paper understands.
A hospital source claimed that the closure of the latter occurred after an elderly woman tested positive for the virus over the weekend.
It is believed that patients in another ward were exposed by a healthcare provider working on the ward, according to a source at the hospital.
The Guardian understands that at least three more wards are expected to close at PMH as early as today.
The Public Hospitals Authority (PHA) did not respond to requests for comment up to press time.
Bahamas Nurses Union (BNU) President Amancha Williams said between 24 and 50 nurses were exposed to COVID-19 on the wards.
She said some of the exposures started as early as July 23.
“Right now, some of them are quarantined according to the exposure,” Williams told The Guardian last night.  Read more >>
Posted by Anthony Derek Catalano at 6:09 AM