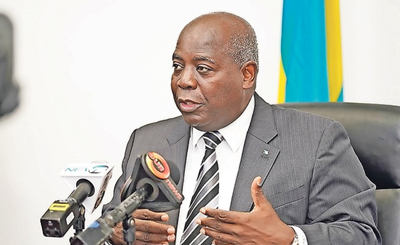 PLP leader Philip Davis
By RASHAD ROLLE
& TANYA SMITH-CARTWRIGHT
PROGRESSIVE Liberal Party leader Philip “Brave” Davis asked Prime Minister Dr Hubert Minnis to waive new wedding rules for one of his constituents on Friday, but confirmation that Dr Minnis approved the request came too late for the couple to host a full-fledged wedding with more than five people.
The Office of the Prime Minister on Sunday said two pre-planned weddings were sanctioned over the weekend with more than five guests, one in New Providence and one on Harbour Island. While pictures and videos of the Harbour Island wedding went viral, details of the second wedding had not been previously known. That wedding in New Providence involved Brian Cameron Albury, an Atlantis employee who postponed his April 13 wedding because of COVID-19 restrictions only to confront the same problem again on Friday. Mr Albury lives in New Providence and his wife lives in Cat Island. Mr Albury said as rumours swirled about an impending lockdown, he spoke to the Cat Island, San Salvador and Rum Cay MP on Friday before Prime Minister Dr Hubert Minnis’ press conference.
“One of my constituents sought permission to continue his wedding as planned,” Mr Davis confirmed to The Tribune yesterday. “I am his representative so the first point of contact is me when something goes wrong. He came to me for help as I represent him. The prime minister indicated to me that he gave permission but my constituent never got word of that permission (until) it was long after the fact…His wedding went on, but it was still not what he had planned.”
Mr Davis said the couple has now lost not only their first wedding investment of about $8,000, but also the thousands more they spent for a second wedding that became less elaborate than planned.  Read more >>
Posted by Anthony Derek Catalano at 6:04 AM