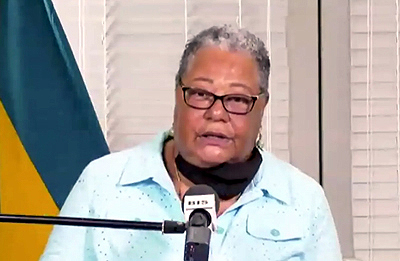 Dr. Merceline Dahl-Regis
NASSAU, BAHAMAS — Dr Merceline Dahl-Regis will continue to offer strategic advice to the government as she steps down from her day-to-day role as the lead COVID-19 response coordinator, according to the Office of the Prime Minister (OPM).
Dahl-Regis was appointed in March, and had initially agreed to serve in the post until the end of June.
The statement read: “She also agreed to extend her service, which will end shortly.
“Dr Dahl-Regis will continue to offer strategic advice to the Government and the Prime Minister but will be stepping aside from day-to-day operations.
The OPM confirmed her departure in a statement after Eyewitness News reported the prime minister’s health adviser was expected next week.
The statement continued: “Dr Dahl-Regis has put in place strategies, policies and procedures as it relates to managing COVID-19 and is confident in the team that will be led by Chief Medical Office Dr Pearl McMillian.
It added: “The Prime Minister thanks Dr Dahl-Regis for her national service and will have more to say in a National Address on Sunday.”  (source)
Posted by Anthony Derek Catalano at 8:20 AM