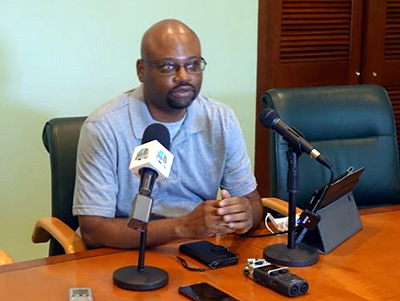 Providing an update on Tropical Storm Isaias that is presently in the tropics, Orson Nixon, Chief Meteorologist, Department of Meteorology, at the Freeport Office, shared with the media on Thursday, July 30, that the Northwest Bahamas was under a Tropical Storm Watch.

Under a Tropical Storm Watch, an area could experience tropical storm conditions generally within 48 hours.

“As Isaias is moving towards the Northwest, near 20 miles per hour, there is expected to be an increase in the forward speed over the next few hours and a couple of days. With this being said, Isaias is expected to move across Hispaniola, and as it moves across that island, some weakening is expected in the intensity of the system.

“Once it moves on off the coast of Hispaniola, we are expecting some degree of strengthening of the system. With the re-strengthening of the system and the slowing down of the forward speed, we expect a shift of the track to be a little more towards the East. This will push it more towards our area. In that case, we have issued a (Tropical Storm) Watch, for the Northwest Bahamas, this is including Grand Bahama, Abaco and Bimini.

“Residents, you are asked to make the preparations for this system as if this system will directly impact and go straight across the center of the country,” advised the Chief Meteorologist.

He pointed out the need to be mindful of debris left behind by Hurricane Dorian.  Read more >>
Posted by Anthony Derek Catalano at 6:21 AM