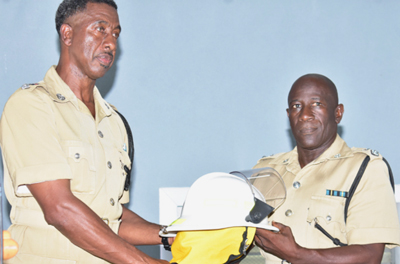 NEW FIRE CHIEF – Superintendent of Police Floyd Bastian (right) accepts the helmet, signaling the handing over of the GB Fire Branch to the new chief. Former chief, Supt. Ernest Hanna (left), who is retiring makes the presentation. (PHOTO: SHAYNE STUBBS)
By FN Reporter Jaimie Smith
Grand Bahama’s new fire chief, Superintendent of Police Floyd Bastian said that he is looking forward to the challenge of the position, despite having served in that capacity before.
Bastian replaced retiring Superintendent Ernest Hanna, as officer-in-charge of the local fire brigade on Monday (July 6), during a handing over ceremony, which was attended by Commissioner of Police Paul Rolle.
The new chief noted that he was delighted to return.
“I am back again. When I left from here, as you know, the Fire Branch was much revered, much respected. We were in all parts of the communities – here, Abaco, Bimini and sometimes in The Berry Islands. We were very, very community- minded, but most of all, we were efficient and effective.  Read more >>
Posted by Anthony Derek Catalano at 8:37 AM