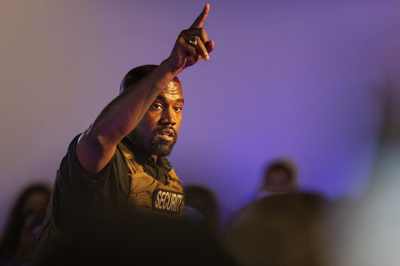 Kanye West makes his first presidential campaign appearance, Sunday, July 19, 2020 in North Charleston, S.C. Rapper Kanye West, in his first event since declaring himself a presidential candidate, delivered a lengthy monologue Sunday touching on topics from abortion and religion to international trade and licensing deals. Whether he's actually seeking the nation's highest office remains a question. (Lauren Petracca Ipetracca/The Post And Courier via AP)
By Mike Catalini
TRENTON, N.J. (AP) — Kanye West’s petition to appear on New Jersey’s ballot as a presidential candidate fails to pass legal muster because signatures are incomplete, and in some cases appear written with very similar handwriting, according to a formal complaint filed with the state Wednesday.
Election law attorney Scott Salmon, a registered Democrat, filed the objection with the state Division of Elections after reviewing the more than 1,300 signatures the rapper had submitted.
New Jersey requires presidential candidates to get 800 signatures to appear on the ballot, but Salmon said in an interview that he counted more than 600 that were in some way defective.  Read more >>
Posted by Anthony Derek Catalano at 4:22 AM