Jeff Bezos Makes $13 Billion in One Day During Pandemic 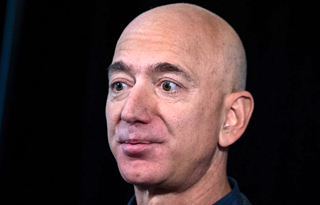 Amazon CEO Jeff Bezos - Photo: Eric Baradat/AFP (Getty Images)
By Tom McKay
The U.S. is hanging on the precipice of economic collapse, with around 25 million Americans slated to be kicked off extended coronavirus pandemic uninsurance later this week and the White House mulling tax cuts and screw you as a replacement. But every cloud has an obscene silver lining: world’s richest man and ghoulish Amazon overlord Jeff Bezos is doing great!
According to a Bloomberg estimate, Jeff Bezos saw his estimated net wealth surge by $13 billion to $189.3 billion on Monday. That’s the largest single-day increase in the history of the news agency’s eight-year-old Billionaires Index. Much of that increase was simply the reversal of a sudden decline in tech company stock last week (Microsoft rose 4.3 percent on Monday, while Tesla rose 9.5 percent). However, Amazon stock is up around 73 percent year to date—fueled by increased online shopping and demand for cloud services, i.e. the pandemic—and Bezos’s personal hoard has surged $74.4 billion since the start of 2020. During that same period Amazon’s awful treatment of its underpaid, overworked armies of warehouse workers and contractors has largely not changed and in some ways gotten worse, “bonus” payments to staff notwithstanding.
A study released this April by the Institute for Policy Studies found that 34 of the nation’s wealthiest 170 billionaires “have seen their wealth increase by tens of millions of dollars” during the pandemic, including Bezos, Tesla/SpaceX CEO Elon Musk, Zoom founder Eric Yuan, former Microsoft CEO Steve Ballmer, and Silicon Valley real estate mogul John Albert Sobrato. The report noted that “the Jeff Bezos wealth surge is unprecedented in modern financial history and varies greatly day by day,” with the $25 billion Bezos racked up between Jan. 1 and April 15 far exceeding the GDP of Honduras ($23.9 billion in 2018).
The report also warned that the nation’s billionaires will likely emerge from the pandemic as though nothing happened “or even see a major surge,” in part because their overall tax burden as a percentage of their wealth plummeted by 79 percent from 1980 to 2018.  Read more >>
Posted by Anthony Derek Catalano at 7:31 AM