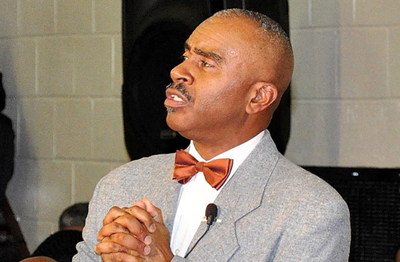 Pastor Gino Jennings
By TANYA SMITH-CARTWRIGHT
tsmith-cartwright@tribunemedia.net
Pastor Gino Jennings, head pastor of First Church of Our Lord Jesus Christ, spoke to The Tribune from his church’s headquarters in Philadelphia, Pennsylvania. The church has branches in America and other countries around the world including Nassau at Honeycomb Street off Hay and Flint Street. Pastor Jennings is known for hard-hitting sermons around the world which can be seen on YouTube.
“I agree fully that the black man has been stereotyped by racist bigots for many years, but that doesn’t justify us in giving them a reason to stereotype us,” Pastor Jennings said.
“That’s why I tell our black men, ‘pull your pants up, man’. Why would you want to advertise your behind? What’s the reason?
“I tell my black brothers and sisters, don’t be lazy, don’t be afraid to work, stop thinking that the only way out of the ghettos of America or the world is to be a rapper or to play ball. Why would you just look at that and think you can’t do anything else? Parents should encourage their children and tell them that they can be a doctor, or a nurse or the President, or a governor or a mayor. If parents are limited in their vision, then the children will be limited on how to approach what they want to accomplish in life. The scriptures teach us that, ‘If there is no vision, the people perish’. That is not just narrowed down to church, but that’s in life.”  Read more >>
Posted by Anthony Derek Catalano at 9:28 AM