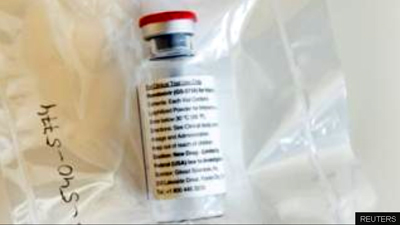 There is widespread hope that remdesivir could treat Covid-19
A BBC investigation has found that two life-saving drugs used to treat Covid-19 patients in India - remdesivir and tocilizumab - are in short supply and being sold for excessive rates on a thriving black market. Vikas Pandey reports from the capital Delhi.
Abhinav Sharma's uncle had very high fever and difficulty breathing when he was admitted to a hospital in Delhi.
He tested positive for coronavirus and doctors told the family to get remdesivir - an antiviral drug that's been approved in India for clinical trial and also under "emergency use authorisation", meaning doctors can prescribe it on compassionate grounds.
But procuring it proved an impossible task - remdesivir did not seem to be available anywhere.
Mr Sharma desperately called people to arrange for the drug as his uncle's condition deteriorated by the hour.
"I had tears in my eyes. My uncle was fighting for his life and I was struggling to arrange the medicine that could possibly save him," he said.
"After dozens of calls, I paid seven times the price to get the medicine. I was willing to pay any price really, but my heart goes out to people who can't afford it," he said.
Mr Sharma's plight is familiar to many families in Delhi, desperate to do whatever it takes to save their loved ones. Some say they have been forced to pay exorbitant prices for the drug - many of those ending up at a medicine market in old Delhi.  Read more >>
Posted by Anthony Derek Catalano at 8:07 AM