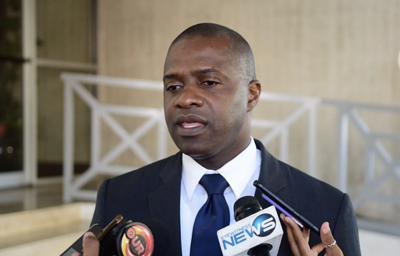 Elsworth Johnson, Minister of Financial Services, Trade & Industry and Immigration (file photo)
420 Bahamians currently employed on project.
NASSAU, BAHAMAS — Minister of Financial Services, Trade & Industry and Immigration Elsworth Johnson defended the decision to grant 135 work permits for construction of the Baker’s Bay project, stating workers hold technical skill sets that will be shared with Bahamians.
Johnson was responding to uproar over the use of foreign labour as the country experiences record unemployment due to the COVID-19 crisis.
He explained Baker’s Bay developers initially requested 500 work permits but were refused due to the government’s mandate to prioritize Bahamian labor.
“After the passage of Hurricane Dorian last September, many parts of North Abaco suffered severe damage, including Baker’s Bay,” read Johnson’s statement.
“Sometime following the aftermath of the storm the developers of Baker’s Bay expressed to the government their desire to rebuild as soon as it was humanely possible. It was further expressed that the intention was to reconstruct the project within a year to a year-and-a-half.  Read more >>
Posted by Anthony Derek Catalano at 12:01 PM