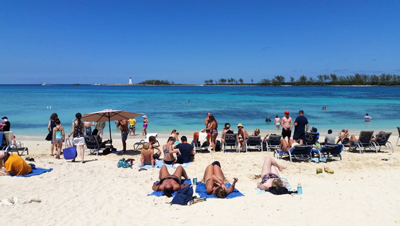 Junkanoo Beach - PhotoⒸDerek Catalano
By Natario McKenzie
NASSAU, BAHAMAS — Tourism dependent Caribbean countries like The Bahamas could see anywhere from 12 percent to as much as 20 percent of its tourism-related labour force ‘adversely affected’ by the COVID-19 pandemic, according to the Inter-American Development Bank (IDB).
In its recently released Caribbean Quarterly Bulletin, the bank noted that The Bahamas is among the most tourism dependent country’s in the region, ranking second to Antigua and Barbuda on its tourism dependency index which listed 10 other countries.
The report read: “For  Caribbean  countries  that  are  most dependent on tourism, such as The Bahamas and St. Lucia, anywhere from 12 percent to as much as 20 percent of the labor force  could be adversely affected by the pandemic.”  Read more >>
Posted by Anthony Derek Catalano at 7:52 AM