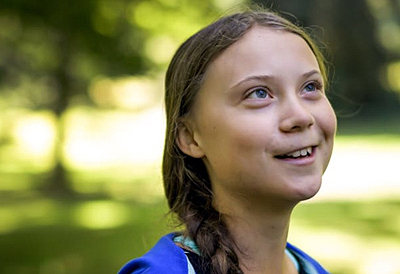 Greta Thunberg in a photograph taken in Geneva, Switzerland, on August 8, 2019.
FABRICE COFFRINI | AFP | Getty Images
By Anmar Frangoul
Climate activist Greta Thunberg plans to donate a 1 million euro ($1.14 million) prize to organizations focused on the environment and climate change.
The 17 year old Swede was named winner of the inaugural Gulbenkian Prize for Humanity on Monday. In a video, she described herself as being “incredibly honored and extremely grateful … this means a lot to me and I hope that it will help me do more good in the world.”
“All the prize money will be donated through my foundation to different organizations and projects who are working to help people on the front lines affected by the climate crisis and ecological crisis, especially in the Global South,” she went on to say.
She added that the money would also “help organizations and projects who are fighting for a sustainable world and who are fighting to defend nature and the natural world.”  Read more >>
Posted by Anthony Derek Catalano at 8:30 AM