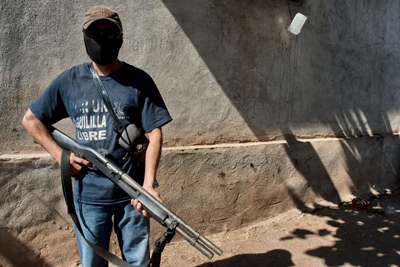 Getty Images
By Nick Dimengo
One would imagine that drug cartels wouldn’t be afraid of too many things, right? After all, these are the same people who carry around AK-47s, handguns, and all sorts of other weapons to protect themselves should a random fight break out, or, just so they can enforce their own rules on people when there’s disagreement. Point blank: They’re some of the most ruthless and terrifying people on the planet when they want to be.
But just because groups of drug cartels don’t fear a bullet going through them, they do seem to fear the invisible beast known as COVID-19 — which is spreading across the world at a rapid pace and infecting and/or killing hundreds of thousands of people. Hey, a gun might protect you from a corrupt drug operation, but it can’t kill the coronavirus.
Seeing as how the pandemic is something literally everyone in the world is dealing with right now, Colombian drug cartels are starting to take matters into their own hands — which is something we also saw happen in Mexico. That’s why a few armed groups with ties to cartels in the country are starting to enforce their own rules when it comes to coronavirus lockdowns, going to such extreme measures that they’re actually killing people who break quarantine.  Read more >>
Posted by Anthony Derek Catalano at 8:34 AM