GB Police will ensure that lockdown rules are adhered to 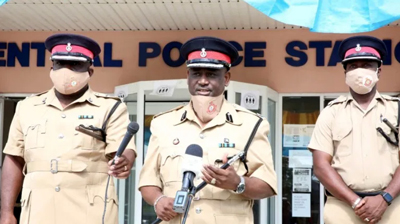 Assistant Commissioner of Police, responsible for Grand Bahama and the Northern Bahamas, Ashton Greenslade (center), says the police department in Grand Bahama is ready to enforce the two-week lockdown on Grand Bahama, which has been implemented to help stop the spread of COVID-19 on the island. ACP Greenslade’s remarks came during a press conference on Thursday morning, July 23, 2020 on the steps of police headquarters. Joining the Assistant Commissioner, who is pictured centre at the press conference, were (left) Chief Superintendent Kenwood Taylor (Officer in Charge of Operations); and Superintendent Avardo Dames (Officer in Charge of Central Police Station). (BIS Photo/Lisa Davis)
By ZNS Bahamas
Assistant C.O.P, responsible for Grand Bahama and the Northern Bahamas District, Ashton Greenslade has assured Grand Bahamians that starting today at 6 p.m.,the Royal Bahamas Police in Grand Bahama will be out in full force to ensure that residents adhere to the two-week lockdown that has been imposed to stop the spread of COVID-19 on the island. During a press conference on Thursday, July 23, ACP Greenslade, along with other high ranking officers of the police force, held a press conference on the steps of Police Headquarters to give an update on police position in terms of the lockdown.
“We will be patrolling the entire island, including West End and Eight Mile Rock, we will have check points at strategic locations and we will be checking all vehicles,” said ACP Greenslade. “Those who are not permitted to be on the streets, are asked to remain home. Those who are considered essential workers and allowed on the streets, please follow the health protocols and wear your masks at all times.  Read more >>
Posted by Anthony Derek Catalano at 4:06 PM