Frederick Douglass statue vandalized, ripped from base in New York 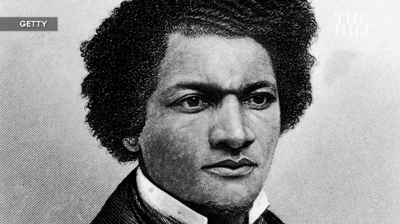 By Justin Wise
A statue of Frederick Douglass was ripped from its pedestal in upstate New York on Sunday, the day marking the 168th anniversary of the American abolitionist giving one of his most seminal speeches condemning slavery.
Rochester police said that the statue was taken from its base in Maplewood Park and carried about 50 feet to a site near the Genesee River gorge, according to The Associated Press. The base, lower part of the statue and a finger on its left hand were reportedly damaged.
Carvin Eison, a leader of a project that brought a Douglas statue to the park in the city, told the Rochester Democrat & Chronicle that another statue would have to take its place because the damage was too significant to repair.  Read more >>
Posted by Anthony Derek Catalano at 8:39 AM