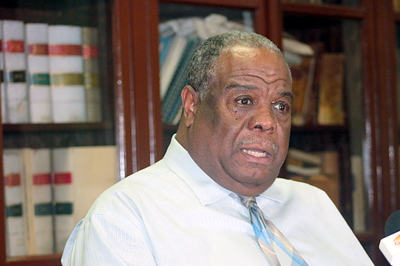 Maurice Tynes
By Rachel Knowles
“What we are seeing now from the prime minister is the corrupting influence of power,” former Chief Clerk of the House of Assembly Maurice Tynes declared yesterday as he excoriated Prime Minister Dr. Hubert Minnis in his role as the competent authority during the state of emergency Tynes believed should have ended long ago.
“The true emergency is in the House of Assembly,” Tynes said while appearing as a guest on Guardian Radio’s “The Revolution” with host Juan McCartney.
Tynes said he does not believe there is still a need for the emergency powers that were put in place in March to prevent the spread of COVID-19 in The Bahamas.
The powers allow the government to enforce curfews, lockdowns, the wearing of masks, social distancing and other measures deemed necessary to curb the spread of the novel coronavirus without passing legislation in Parliament.
“It’s gotten to the point now where, obviously, there are no emergencies dealing with COVID,” he said.
“The emergency may reappear after today when we start letting Americans and other foreigners into our country.
“But it seems that the continued use of the emergency powers is one of three things, I think. It’s either out of spite, out of the corrupting influence of power and control, or it may also be to do with trying to keep the crime and murder figures down.  Read more >>
Posted by Anthony Derek Catalano at 9:30 AM