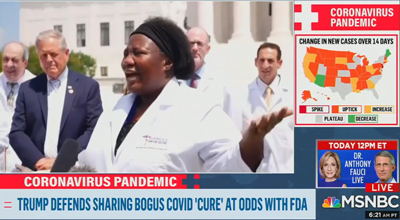 By Ursula Perano
Former FDA Commissioner Scott Gottlieb, who served under President Trump, told MSNBC on Wednesday that hydroxychloroquine "definitively" does not work as a coronavirus treatment.
Why it matters: Trump took the drug in May as a preventative measure against the virus and has prompted controversy by continuing to tout its efficacy despite the FDA ending its emergency use authorization.
Trump and his son, Donald Trump Jr., garnered more controversy this week after retweeting a viral video falsely claiming that hydroxychloroquine is a "cure" for the virus. That caused Twitter to temporarily bar Trump Jr. from tweeting or retweeting.  Read more >>
Posted by Anthony Derek Catalano at 6:29 AM