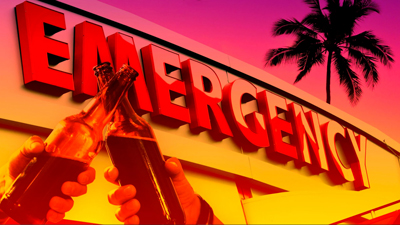 Often asymptomatic, they go right back out the door—and into the community.
Photo Illustration by Sarah Rogers/The Daily Beast / Photos Getty
By Francisco Alvarado
A week ago, Jordan Rodriguez and his fiancée met up with two friends for tacos, chicken wings, and pitchers of beer at a local pub in Pembroke Pines, Fla., one of several outings the 38-year-old has enjoyed since the Sunshine State reopened for business in May.
“I wouldn’t say I felt safer, but I had started venturing out again a little bit,” Rodriguez told The Daily Beast. “I still wear a face mask whenever I go out and I have always been a germaphobe, so I’m regularly washing my hands with soap.”
Little did he know that the coronavirus was likely already gestating inside him. The following morning, Rodriguez felt lousy when he woke up. Initially, he chalked it up to a few too many beers. But as the day progressed, Rodriguez wasn’t feeling better. “I took my temperature and I had a fever of 99.9,” he said. “I knew I had to get tested.”
Rodriguez drove to the emergency room of the Cleveland Clinic Florida in nearby Weston, where he took a rapid test confirming he was positive for COVID-19, he recalled. His fiancée and his two friends got tested as well, but came up negative, Rodriguez said. “Since that day, I’ve felt no symptoms. I check my temperature regularly and it hasn’t gone up. But I’ve been quarantined in my bedroom.”
With the Sunshine State’s COVID-19 surge gathering strength like a monstrous hurricane, emergency rooms across the pandemic epicenter of South Florida are experiencing more and more patients in their 20s and 30s carrying the coronavirus. That squares with repeated explanations for case surges in the state by Gov. Ron DeSantis—that reckless, often young people are a big part of the problem. While DeSantis does acknowledge they pose a risk to others, the implication of his appraisal, critics say, is that the state’s hospital system is not in danger of being overloaded.
But some local hospitals have already reached or are nearing capacity, and these facilities are processing people like Rodriguez who took part in a reopening their government endorsed—only to get infected and exhibit mild symptoms. Such patients are often being quickly discharged, posing that very risk of spreading the deadly respiratory disease to elder family members, significant others, friends, and strangers should they not properly quarantine, health experts warned.  Read more >>
Posted by Anthony Derek Catalano at 4:27 PM