Five Graduate with Honours from the Centre for the Deaf 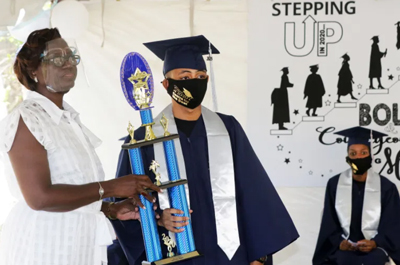 Mrs. Sonja Rolle, Principal, Red Cross Centre for the Deaf, presenting Mr. Jevonny Allen with the Principal’s Award during Friday’s Graduation Exercise held at the school’s campus. Mr. Allen recorded the highest Grade Point Average of the 2020 Graduating Class and was one of three students who maintained Honour Roll status from Grades 10-12. Mr. Patrick Pierre and Miss Chinvia Saunders also accomplished the feat. (BIS Photo/Derek Smith)
By ZNS Bahamas
All five members of the 2020 Graduating Class of the Red Cross’ Centre for the Deaf graduated with Honours from the school Friday (July 24) a feat, school officials called a “smashing success.” The five graduates were: Jevonny Allen (who received the Principal’s Award for recording the highest G.P.A), Wilfrenique Belizaire, Waydesha Lewis, Patrick Pierre and Chinvia Saunders. Allen, Pierre and Saunders also received awards for attaining Honour Roll status during their accumulative High School years (Grades 10-12). The Centre utilizes the same curriculum as any other public high school in The Bahamas.
The group will enroll at the Bahamas Technical Vocational Institute during the next phase of their academic pursuits. Their goals are to become business owners at the conclusion of their studies at B.T.V.I. Minister. of Social Services and Urban Development, the Hon. Frankie A. Campbell said the students’ success was yet another example of the
abilities of the community of persons with disabilities and of the possibilities that can exist when access and inclusion for all is fortified, and when the focus is on a person’s abilities as opposed to any disability with which they may live.
Min. Campbell told the graduates, their teachers and parents, that the Government of The Bahamas remains committed to ensuring access and inclusion for all of its citizens. Access and inclusion was the common message delivered by Minister Campbell and Minister of Education, the Hon. Jeffrey Lloyd, during the Graduation Ceremony held on the school’s campus.  Read more >>
Posted by Anthony Derek Catalano at 7:14 AM