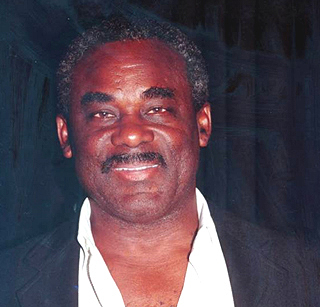 "Duke" Errol Strachan, M.B.E.
Errol Strachan was born in Snug Comer, Acklins on the 18th day of December 1932 to the then Lillian Ferguson who later became Lillian Taylor of the above island and James Shadrack Strachan of Eight Mile Rock, Grand Bahama. Errol came to Nassau at the age of nine months. When he was old enough he started school at St. Joseph's School, Farrington Road where he also attended church. At the age of 12 Errol became a choir and altar boy. Being in the choir he became very interested in singing. A short while later he joined the 5th Bahamas Boy Scouts, where Errol played the bugle.
About one month later a trumpet was placed in his hand by the then Father Album. As the years rolled by Errol got into many other things such as auto mechanics, construction, and all sorts of sports, but singing and playing music was always his love. Whether he was working on a car or on a building he was always singing a tune. In the very late 40's, 1949 to be exact, Errol began to frequent nightclubs such as the Zanzibar Nightclub on Blue Hill Road or the Silver Slipper on East Street, begging and hoping the band leader would let him sing a song or two before the night was over.
One of those band leaders was the late Freddie Munnings, who when he found out that Errol really did want to become a singer, opened his band to Errol; for this he was very grateful to Freddie. Then came Errol's big moment in 1954 at the Cat & Fiddle which was run by the late Bert Cambridge, Mr. Cambridge held an amateur contest in which Errol took part, and won first prize, from then on it was go, go, go. By late 1954 Errol and his cousin Eric Gibson (a.k.a. King Eric) got together and formed a band. They played at the Blue Rest Club on Kemp Road, which only lasted for a few months. In 1955 he married to the former Dorothea Archer. During the 1950's Errol performed in many charitable concerts; also over the years, he did a number of performances abroad in Canada and various cities in the United States.  Read more >>
Posted by Anthony Derek Catalano at 10:12 AM