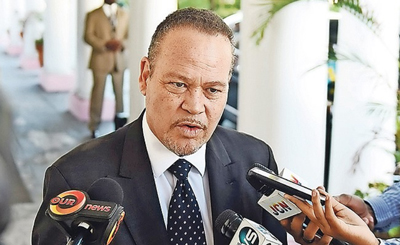 Attorney General Carl Bethel
By LEANDRA ROLLE
Tribune Staff Reporter
lrolle@tribunemedia.net
A DRAFT bill on marijuana legislation is expected to be presented to Cabinet “in very short order,” Attorney General Carl Bethel said yesterday.
However, Mr Bethel told The Tribune he could not give a definite timeline on the matter as he is still waiting to receive the official draft from his office.
“I’ve asked for the draft persons to prepare a draft bill to circulate and have approved by Cabinet. I haven’t got it back yet. I will follow up with it today,” he said.
“I’ve sent, several weeks ago, instructions. We’ve been very busy working on a host of battles including that so in due course, in very short order, it will be brought forward for consideration by Cabinet.”
His comments come as calls for marijuana law reform intensify in the country, with some observers noting the economic benefits that legalising marijuana could bring to aid country’s economic recovery from the COVID-19 crisis.  Read more >>
Posted by Anthony Derek Catalano at 8:58 AM