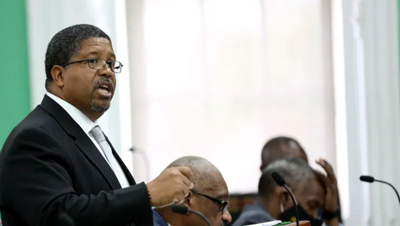 Hon. K. Peter Turnquest
By ZNS Bahamas
Deputy Prime Minister and Minister of Finance the Hon. K. Peter Turnquest stated that this Government’s Administration has acknowledged the decision by credit ratings agency Moody’s to downgrade the country’s credit rating as a result of the economic shocks caused by the COVID-19 pandemic. However, DPM Turnquest also noted that similarly, Italy, India and even Canada have also seen downgrades. “I want to reiterate that fair-minded Bahamians know that our current state of fiscal affairs is a result of these external shocks and not because of our performance as a Government,” he explained during a virtual Budget Education Campaign Wind Down Press Conference on Wednesday, July 1, 2020.
The DPM stated that Moody’s highlighted that this administration has shown leadership by significantly improving the government’s fiscal credibility and effectiveness through its accountable, and responsible fiscal policy framework and consolidation efforts.
“As we learn of layoffs associated with the tourism sector shutdown, these unfortunate outcomes will no doubt continue to create hardship for our people. “Those workers represent hundreds of households and thousands of mouths to feed. That is why we anchored our plan for the new fiscal year in the current realities. That is why we chose to invest in families, communities, and businesses, who need the support of their government to survive this crisis and emerge ready for new opportunities.”  Read more >>
Posted by Anthony Derek Catalano at 9:13 AM