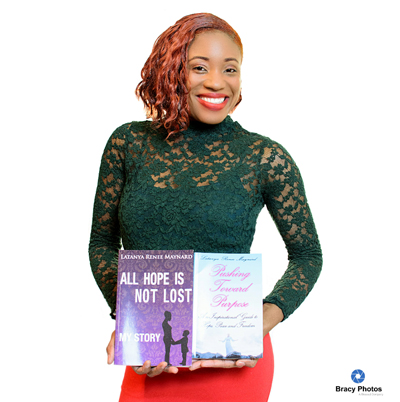 ‘All Hope Is Not Lost’: Domestic Violence Survivor Latanya Maynard Encouraging U.S. And Caribbean Women To Know Their Worth
By Arthia Nixon
Jacksonville, Florida… Author, influencer and advocate Latanya Maynard is reminding women that “All Hope Is Not Lost,” as she encourages them to know their worth and find the strength to walk away from situations and people who could cost them their lives.
Her book ‘All Hope Is Not Lost’ details her own experience with domestic violence and how she found herself in the cycle she saw play out in her own childhood in Eleuthera, The Bahamas.
“I grew up witnessing my mother being physically abused and while I knew it wasn’t right, a part of me accepted that in order to make a marriage work, you just keep it moving for better or worse even if the worse left you bruised, bleeding and broken,” says Maynard. “I took that childhood trauma into my relationships and as a young woman, found myself being abused by the men I dated and the one I married. Too often parents forget that their children follow those generational cycles but eventually, I had to break it to save myself.”
Maynard not only broke the cycle, sought therapy and began the healing process, she also reached back out to the women in her family and others to offer a listening ear, something that would eventually lead her to becoming a victim’s advocate with a Jacksonville women’s outreach center. She said she realized she had fully healed when she began writing books and short poems. Maynard recently did a video on a poem she wrote for black men following George Floyd and Ahmad Arbery’s deaths and it went viral.
Now a motivational speaker and author with a lifestyle brand, Maynard gives scholarships to young women hoping to empower them to never feel trapped when they have educational tools to help sustain themselves. In her sophomore book ‘Pushing Toward Purpose’, she encourages women what to do when they start over.
“As women, we often settle,” Maynard says. “We should never settle for less than we deserve because we are valuable and need others to see that. When you know better, you do better and some of us just do not know how to do better because in some instances we weren’t taught. What you have been through does not define where you are destined to be and that is my story.”
Posted by Anthony Derek Catalano at 6:16 AM