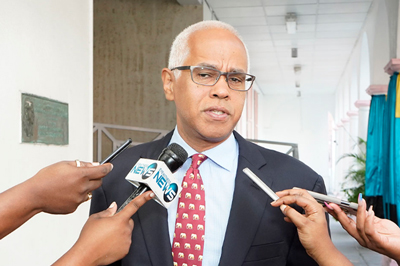 Minister of Tourism & Aviation Dionisio D'Aguilar
By Kyle Walkine
Nearly three weeks after the country reopened to international commercial travel, Minister of Tourism and Aviation Dionisio D’Aguilar said yesterday the spike in COVID-19 cases is “domestic grown” and suggested the government could have implemented stricter measures for Bahamians traveling abroad.
“Maybe in hindsight we were not strict enough on Bahamians going in and out of the country,” D’Aguilar told reporters outside Government House.
He added, “From the evidence that I have right now in front of me, I have no known cases by foreign visitors coming into the country. They were all following the protocols, getting the COVID-19 tests, we were screening them before they came. So, I think that was working well.”
Since borders fully reopened on July 1, there have been 70 confirmed cases of COVID-19 in The Bahamas. Fifty-one of the new cases were on Grand Bahama, another two cases were Inagua residents who were said to be on New Providence, and the remainder of the cases were New Providence residents.
On Sunday, Prime Minister Dr. Hubert Minnis announced a ban on commercial flights and vessels traveling from all countries excluding the United Kingdom, the European Union and Canada in an effort to minimize the risk from countries like the United States where COVID-19 cases continue to skyrocket.
According to D’Aguilar, the decision wasn’t made based on visitors, but travel by locals.
“Unfortunately, citizenry took advantage of their increased ability to travel and you will see that all of the cases are really domestic grown,” D’Aguilar said.  Read more >>
Posted by Anthony Derek Catalano at 9:14 AM