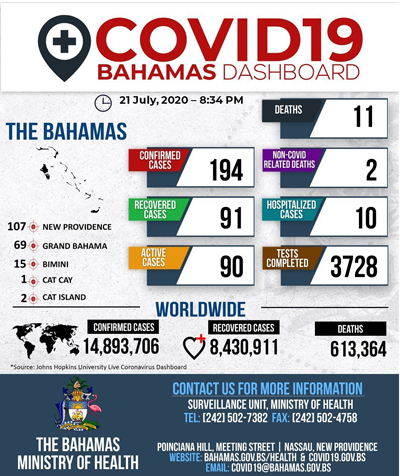 By Eyewitness News
41 cases in 72 hours.
NASSAU, BAHAMAS — Health officials confirmed twenty new cases of COVID-19 late last night, bringing the total number of cases in the country to 194.
According to the statement, there are 10 new cases in Grand Bahama, six in New Providence, two in Cat Island and two new cases in Bimini.
Despite repeated inquiries from the media, the COVID-19 dashboard was not issued until 11.35pm.
However, due to an error that incorrectly reflected the total number of new cases, the dashboard and accompanying statement was reissued at midnight.
The COVID-19 dashboard has typically been provided before 7pm daily.
According to officials, the dashboard was still being finalized at 10.30pm.
No further details were released concerning the new cases.
This is the third consecutive day that health officials have been unable to confirm patient details like age, sex, and travel history.
The statement read: “Further details of these cases were unable to be confirmed at the time of the release of this report. Investigations are ongoing, and a complete update of details will be published at a later date.
It added: “Health officials continue to follow the condition of the other current COVID-19 positive cases.”
As of today, there were 194 cases of COVID-19 in The Bahamas — 107 cases in New Providence, 69 in Grand Bahama, 15 in Bimini, two in Cat Island, and one confirmed case in Cat Cay.  (source)
Posted by Anthony Derek Catalano at 9:48 AM