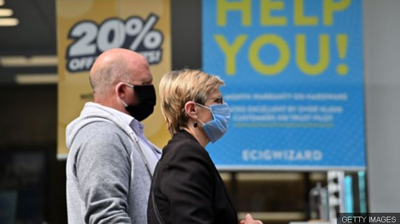 The UK lags behind in setting clear policies on face coverings and on using them, the Royal Society says.
Everyone should carry a face covering when they leave home in order to tackle coronavirus, the head of the UK's national academy of science has said.
Prof Sir Venki Ramakrishnan, president of the Royal Society, said the coverings should then be worn "whenever you are in crowded public spaces".
He added there was evidence that they protected both the wearer and those around them.
The UK was "way behind" many countries in their usage, he said.
Current guidance on face coverings varies across the UK, but Public Health England previously said they did not need to be worn outdoors.
Speaking as the Royal Society published two reports on face coverings, Prof Ramakrishnan said the public remained "sceptical" about their benefits because "the message has not been clear enough" and guidelines have been inconsistent.
He added: "What we would like for the government is to be a bit stronger and clearer about the messaging and require it whenever you are in crowded public spaces where you cannot get more than two metres away from the next person.
"If you're in a crowded setting, you ought to wear a mask."  Read more >>
Posted by Anthony Derek Catalano at 8:01 AM