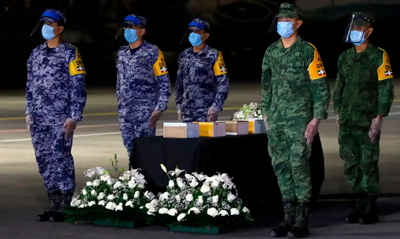 Mexican military personnel stand next to some of the more than 200 urns containing the repatriated ashes of those who died of Covid-19 in the US. Mexico now has the fourth-highest death toll. Photograph: Claudio Cruz/AFP/Getty Images
The World Health Organization has reported another record in the increase in the number of confirmed coronavirus cases over a 24-hour period, at over 230,000. The previous global record was on Friday, with more than 228,000 fresh cases worldwide.
According to the Johns Hopkins University tracker, which relies on official government data, a total tally of close to 12.9 million cases were recorded worldwide by early on Monday, and 568,296 deaths.
The true global infection and death totals are likely to be higher due to delays in reporting, differing definitions and testing rates and suspected underreporting from some countries.  Read more >>
Posted by Anthony Derek Catalano at 8:57 AM