Coronavirus cases soar by more than 1 million over 5 days 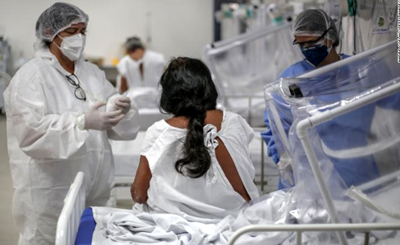 By Emma Reynolds and Henrik Pettersson, CNN
(CNN) - Coronavirus cases soared by more than a million globally in just five days as the numbers continue to accelerate from week to week, according to figures from Johns Hopkins University.
Reported cases increased by 1,046,200 from July 6 through July 10, up from a 994,400 increase over the five days from July 5 through July 9.
The total global case number surpassed 13 million on Monday, growing by 1,061,600 between July 8 and July 13.
While some countries that were hit early in the outbreak have managed to contain the virus, the number of cases globally has been accelerating fairly steadily.
There have now been more than half a million deaths from the virus worldwide, according to JHU data.  Read more >>
Posted by Anthony Derek Catalano at 4:31 PM