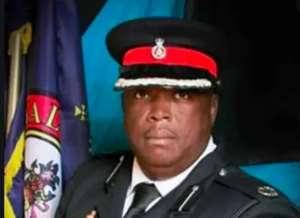 COP Paul Rolle
NASSAU, BAHAMAS — Police Commissioner Paul Rolle yesterday issued a strong warning to would-be participants of Independence rallies or motorcades that no events have been approved.
Addressing the media at police headquarters, the commissioner said there were several requests for these events, but in accordance with Article 15 of the emergency orders, they could not be permitted.
“They will not happen, so I say to members of The Bahamas — do not go out; do not attempt to go out and participate in any motorcade,” Rolle said.
“They were not approved. We will allow motorcades later, but unfortunately we are unable to do that now and I encourage people to abide by the rules and save themselves from unnecessary heartache.”
Rolle said officers will be out in full force to enforce the executive orders, including the closure of beaches on New Providence, Paradise Island and Grand Bahama.  Read more >>
Posted by Anthony Derek Catalano at 8:50 AM