Contractors association: At least another year or two before Abaco returns to normal 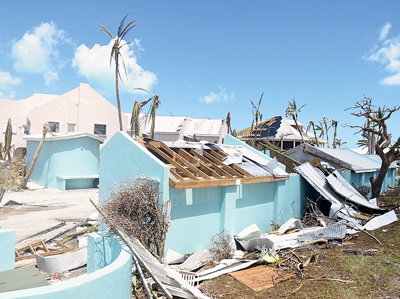 Destruction on Abaco following Hurricane Dorian.
By Paige McCartney
With nearly a year passed since Hurricane Dorian leveled certain parts of Abaco, Bahamian Contractor’s Association President Michael Pratt yesterday said it will be at least another year or two before parts of the storm-ravaged island start to look like they did before.
Many parts of the island remain in shambles and without electricity, creating what Pratt called a “desperate” situation for not only residents but contractors wanting to rebuild.
“I think if you look at the last response coming out of Abaco, I think…until that infrastructure is put back in place, I think the government is trying to find homes for their workers and to get their workers back in homes, so if the government is trying to get their workers back in homes, imagine the people who lived there before,” said Pratt, who added he regularly communicates with contractors on the island.
“It’s going to be a while to get back to where we were. It’s going to be a while, I can’t really say how long, but I expect it to be at least a year or two before we can begin to see the rebuilding of some of these communities the way they were before.
“That being said, some works and some infrastructure is being put back in place as we speak. So it’s not as desperate as it looks, but really and truly it is desperate. Especially since we are on the eve of another hurricane season.”  Read more >>
Posted by Anthony Derek Catalano at 9:34 AM