Bill Gates Says Facebook Helped Cause the Spread of Covid-19. Here's How We Stop It 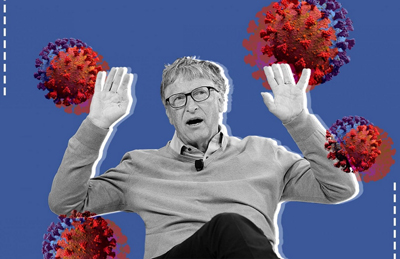 In an interview, the philanthropist says that social media could do more to help slow the spread of the pandemic. Photo: Getty Images/Illustration: Chloe Krammel
By Jason Aten
As large parts of the country are wrestling with how to reopen the economy without continuing the spread of Covid-19, Bill Gates has some ideas about how we got here, and what we should do next.
The Microsoft co-founder and philanthropist has become an outspoken figure on the United States' lack of preparation handling the pandemic, while his foundation has taken a leading role in areas like testing and vaccine research. I mention the latter because, despite the fact that Gates isn't a medical doctor, he has devoted the much of his life to researching, supporting, and funding public health initiatives.
Now, in an interview with the Fast Company Impact Council, Gates shared one of the reasons we aren't further along in fighting the spread of the coronavirus.
"A lot of it comes in the form of conspiracy... It is a bit scary when you want to be driven toward the facts in a crisis like this." Gates said. Pointing out that is likely "part of the reason why the mask compliance is lower here than in other countries."
Of course, there have been plenty of conspiracy theories surrounding Covid-19, as well as general misinformation and resistance to the facts, much of which plays out on social networks, Twitter and Facebook in particular. Gates himself has been the subject of many of those conspiracy theories, accusing him of everything from inventing the virus, to using vaccines as a tool to microchip Americans.
"Can the social media companies be more helpful on these issues?" asked Gates. "Sadly, the digital tools probably have been a net contributor to spreading what I consider crazy ideas."  Read more >>
Posted by Anthony Derek Catalano at 9:07 AM