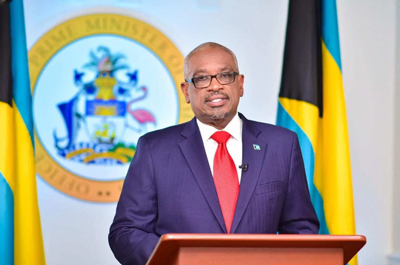 PM Dr. Hubert Minnis
By Royston Jones Jr.
US travel blocked; new curfew for GB
NASSAU, BAHAMAS — Fifteen new coronavirus cases have been confirmed in the country today — a record daily count since the onset of the pandemic in mid-March.
During his national address, Prime Minister Dr Hubert Minnis announced the closure of all international commercial flights, except from Canada, United Kingdom and the European Union as of Wednesday.
He also announced the immediate suspension of Bahamasair flights to the United States, alongside increased restrictions and offenses aimed at curbing the virus’ resurgence.
There have been 49 new cases since the borders reopened on July 1 — 31 in Grand Bahama and 18 in New Providence.
The new infections have pushed the total number of confirmed cases to 153.
In New Providence, the new cases include two men, ages 53 and 29, both of whom had a history of travel, and two women. ages 29 and 58. One of the women had a history of travel.
The remaining 11 cases also stemmed from Grand Bahama and included three women and eight men, ranging in age from 17-year-old to 71.
Details on travel history and condition of those patients were “unable to be confirmed” at the time of the report, and health teams are reportedly investigating and updating records to publish in a later update.
As it relates to Grand Bahama, which has undergone a surge of cases, the prime minister announced a new curfew from 7pm to 5am daily on the island, effective Monday.
He said all private and public beaches will be closed until further notice effective, Monday at 5am.
Additionally, international and domestic borders will be closed to all incoming and outgoing flights and sea vessels to and from Grand Bahama with exception of emergency transport
A curfew remains in effect on all other islands from 10pm to 5am.
However, public parks and beaches in New Providence will be closed until further notice from Monday at 5am.
The prime minister also announced restaurants at Arawak Cay and Potter’s Cay will also be closed effective tomorrow.
He said measures will remain until “we are able to ensure better social distancing can be practiced”.  Read more >>
Posted by Anthony Derek Catalano at 5:29 PM