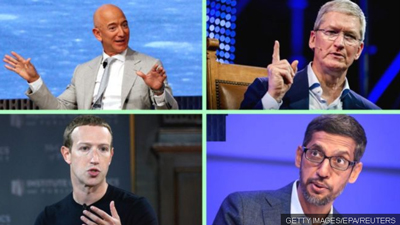 Amazon's Jeff Bezos, Apple's Tim Cook, Facebook's Mark Zuckerberg and Google's Sundar Pichai defended their firms.
The heads of some of the world's biggest tech companies have appeared before Washington lawmakers to defend their firms against claims they abuse their power to quash competitors.
Amazon boss Jeff Bezos said the world "needs large" firms, while the heads of Facebook, Apple and Google argued their companies had spurred innovation.
The appearance comes as lawmakers consider tougher regulation and competition probes are under way.
Some critics want the firms broken up.
Democrats pressed the tech titans on competition issues, while Republicans were more concerned about how they managed information and whether they were marginalising conservative views.  Read more >>
Posted by Anthony Derek Catalano at 7:07 AM