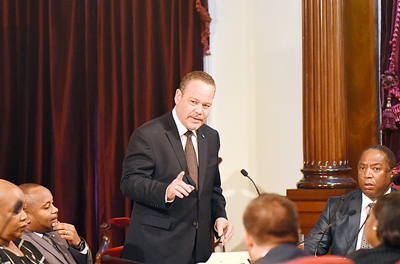 AG Carl Bethel
By The Nassau Guardian
Attorney General Carl Bethel withdrew the latest proclamation of emergency from the Senate on Friday morning after the opposition questioned whether the parliamentary sitting was properly constituted.
Leader of Opposition Business in the Senate Fred Mitchell raised the issue shortly after Bethel tabled a proclamation of emergency from the governor general that saw the new state of emergency start on Tuesday.
“We are asking whether this meeting is properly constituted for the purposes of laying this proclamation today and we have examined article 29, sub article 3 of the Constitution and it seems to require certain specific things to be done in order to convene the Senate with regard to the laying of this particular proclamation,” Mitchell said.
Article 29 of the Constitution states: “Where any proclamation of emergency has been made, copies thereof shall as soon as practicable be laid before both Houses of Parliament, and if for any cause those Houses are not due to meet within five days the governor general shall, by proclamation published in the gazette, summon them to meet within five days and they shall accordingly meet and sit upon the day appointed by the proclamation and shall continue to sit and act as if they had stood adjourned or prorogued to that day provided that if the proclamation of emergency is made during the period between a dissolution of Parliament and the next ensuing general election.”
Mitchell asked for clarification.  Read more >>
Posted by Anthony Derek Catalano at 12:07 PM