After Taking Down Her COVID Video, Dr. Stella Immanuel Warns ‘If My Page is Not Back Up Face Book Will be Down in Jesus Name’ 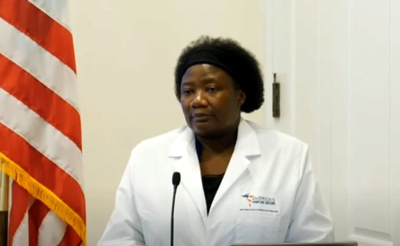 Dr. Stella Immanuel - image:Twitter
By Cedric 'BIG CED' Thornton
A video of a Black doctor touting the effects of hydroxychloroquine to treat the coronavirus went viral. In the video, she says she used the drug to treat more than 350 patients in Houston, Texas.
The video was retweeted by President Donald Trump and his son, Donald Trump Jr. Social media giants Twitter and Facebook had the video taken down for the unfounded claims and it ticked the doctor off as she threatened Facebook by telling them to “put back my profile page and videos up or your computers with start crashing till you do,” according to the New York Daily News.  Read more >>
Posted by Anthony Derek Catalano at 6:45 AM