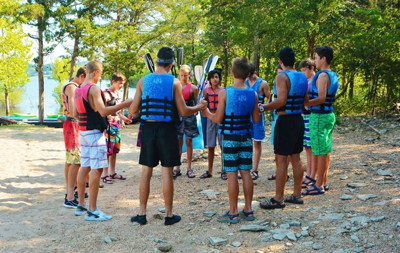 The Kanakuk camp in Lampe, Missouri, had promised kids ages 13–18 fun activities and Bible studies, but campers were sent home last week due to a coronavirus outbreak.
By David Mack
A summer camp run by a Christian group in Missouri has shut down after more than 80 children and staffers tested positive for the coronavirus, health officials said.
Organizers of the Kanakuk K-2 camp in Lampe in the state's southwest near the Arkansas border made the decision to shut down last week due to a number of suspected cases, according to the Stone County Health Department.
On July 2, health officials said at least 41 campers and staff had tested positive. By Monday, that number had doubled to 82.
Health officials said the children were returning to their homes in 10 different states, as well as multiple Missouri counties.
"The decision to close has resulted in all campers, counselors and staff to return to their homes," they said on Facebook. "SCHD will be working closely with Kanakuk Kamps to identify exposed individuals and quarantine those individuals, as necessary."  Read more >>
Posted by Anthony Derek Catalano at 7:51 AM