White House goes quiet on coronavirus as outbreak spikes again across the U.S. 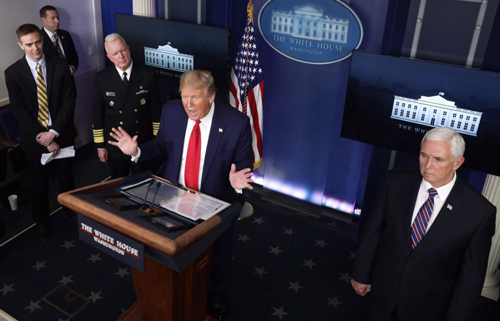 President Donald Trump speaks at a coronavirus press briefing in April. The White House Covid-19 task force has scaled back its once-daily internal meetings — the task force now meets twice per week. | Alex Wong/Getty Images
By Dan Diamond
The coronavirus is still killing as many as 1,000 Americans per day — but the Trump administration isn’t saying much about it.
It’s been more than a month since the White House halted its daily coronavirus task force briefings. Top officials like infectious disease expert Anthony Fauci have largely disappeared from national television — with Fauci making just four cable TV appearances in May after being a near fixture on Sunday shows across March and April — and are frequently restricted from testifying before Congress. Meanwhile, President Donald Trump is preparing to resume his campaign rallies after a three-month hiatus, an attempted signal to voters that normalcy is returning ahead of November’s election, and that he’s all but put the pandemic behind him.
“We’ve made every decision correctly,” Trump claimed in remarks in the Rose Garden Friday morning. “We may have some embers or some ashes or we may have some flames coming, but we’ll put them out. We’ll stomp them out.”
Inside the White House, top advisers like Jared Kushner privately assured colleagues last month that the outbreak was well in hand — citing data on declines in community spread — and that the long-feared “second wave” may have even been averted, according to three current and former officials. However, new data from states like Florida and mass protests across the country are renewing concerns about the virus’s spread. Texas, for instance, has reported two straight days of record-breaking coronavirus hospitalizations — highs that come shortly after the state kicked off the third stage of its reopening plan.  Read more >>
Posted by Anthony Derek Catalano at 5:29 AM