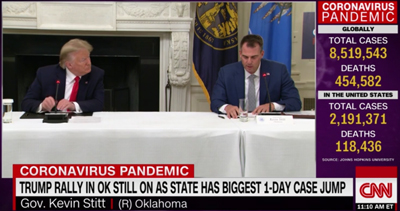 Analysis by Maeve Reston, CNN
(CNN) - President Donald Trump returns to the campaign trail Saturday in Tulsa with his first rally since the coronavirus pandemic began, looking to reignite support for his struggling reelection bid while sweeping aside concerns from his own health experts and continuing to stoke tensions by threatening protesters outside his Oklahoma spectacle.
Trump is eager to resume the boisterous rallies that he believes were key to his 2016 victory at a time when his reelection prospects have dimmed, in large part because many Americans disapprove of his handling of both the coronavirus and his response to calls for racial justice that are gripping this country.
His own plans for the rally -- originally scheduled for Friday, which was Juneteenth -- the day marking the end of slavery in the United States -- may have only deepened the sense that the President, who has a history of making racist remarks and is opposed to renaming military bases named for Confederate leaders, is out of touch with a county trying to reckon with its racially violent past. That past is especially painful in Tulsa, home to a 1921 massacre of hundreds of Black Americans who were attacked by a White mob in Greenwood, a neighborhood then known as "Black Wall Street" that was looted and burned.  Read more >>
Posted by Anthony Derek Catalano at 8:48 AM