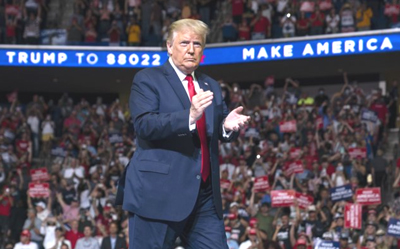 President Donald Trump arrives on stage to speak at a campaign rally at the BOK Center, Saturday, June 20, 2020, in Tulsa, Okla. (AP Photo/Evan Vucci)
TULSA, Okla. (AP) — President Donald Trump said Saturday he’s asked his administration to slow down coronavirus testing because robust testing turns up too many cases of COVID-19.
Trump told supporters at his campaign rally that the U.S. has tested 25 million people, far more than any other country. The “bad part,” Trump said, is that widespread testing leads to logging more cases of the virus.
“When you do testing to that extent, you’re going to find more people, you’re going to find more cases,” Trump said. “So I said to my people, ‘Slow the testing down, please.’ They test and they test.”
The campaign of likely Democratic presidential rival, Joe Biden, said Trump was putting politics ahead of the safety and health of Americans.  Read more >>
Posted by Anthony Derek Catalano at 7:09 AM