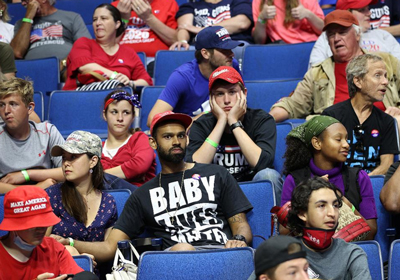 TULSA, OKLAHOMA - JUNE 20: Supporters wait for the start of a campaign rally for U.S. President Donald Trump at the BOK Center, June 20, 2020 in Tulsa, Oklahoma. Trump is holding his first political rally since the start of the coronavirus pandemic at the BOK Center on Saturday while infection rates in the state of Oklahoma continue to rise. (Photo by Win McNamee/Getty Images) Getty Images
By Andrew Solender, Forbes
The Trump campaign announced Saturday evening that they were cancelling a planned second speech at the president’s Tulsa rally due to low turnout, blaming the turnout on protesters and the media.
The campaign anticipated a crowd too large for Tulsa’s BOK Center, a stadium with a capacity of 19,200, claiming to have received over a million ticket requests.
"There was so much response, over a million ticket requests, that we decided that the BOK Center was just not big enough,” Trump campaign Communications Director Tim Murtaugh said on Friday, announcing the president would “speak in both locations."
But as the crowd filed in Saturday evening, it looked as though there wouldn’t be enough people to fill the stadium, let alone necessitate a second speech.
In a statement, Murtaugh announced the campaign was canceling the speech, insisting that the president’s supporters were energized and blaming the low turnout on protesters and the media.  Read more >>
Posted by Anthony Derek Catalano at 8:17 PM