Sister Rosetta Tharpe: The Rose From Which Rock Grew 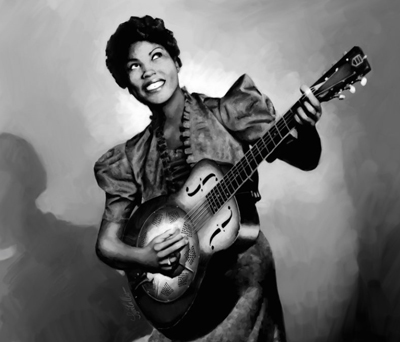 Sister Rosetta Tharpe
When asked to think of the architects of rock music some names are at the forefront of people’s minds. Elvis, Chuck Berry, Jerry Lee Lewis, Little Richard, Jimmy Hendrix, and Buddy Holly are sure to come up but one name that has slipped off many of the popular lists is Rosetta Tharpe, the guitar strumming and songwriting godmother of rock and roll to whom they all owe a great debt.
Born in Cotton Plant, Arkansas on March 20, 1915, Rosetta Nubin began playing music very early with the strong encouragement of her mother, a singer and mandolin player. Her mother was also a preacher for the Church of God In Christ (COGIC), an extremely progressive congregation that allowed female preachers and put a strong emphasis on musical expression as a part of worship. By the age of four Rosetta was on stage performing songs like “Jesus is on the Main Line” and within the next two years she became a regular alongside her mother in a traveling evangelical troupe. Before she turned ten years old it was clear that the young girl was more than talented, she was an absolute musical prodigy more than deserving of her billing as “a singing and guitar playing miracle”.
After building a name for themselves throughout the southern states Rosetta and her mother moved to Chicago, Illinois in the mid-1920s where the pair kept traveling and performing while still calling the COGIC church their home base. Her considerable talent paired with the fact that prominent female African American guitarists were rarely seen made her an even greater star and she continued to earn high praise for her otherworldly guitar abilities and her unique sound combining gospel, blues, and jazz.  In 1934 Rosetta married a minister named Thomas A. Thorp and although the marriage only lasted a few years his altered last name of Tharpe would be the moniker that Rosetta would use for the rest of her career. She also added a third part to her name and from that point on she was known as Sister Rosetta Tharpe.  Read more >>
Posted by Anthony Derek Catalano at 11:24 AM