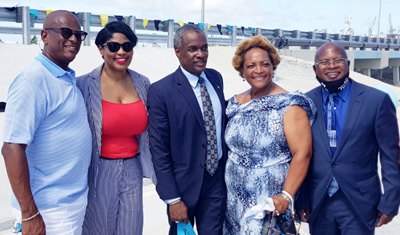 OFFICIALLY OPENED – Present and former Members of Parliament for West Grand Bahama were pleased that the lone access road to and from the Western District was elevated and officially opened on Friday, June 26. Pictured from left are former Member of Parliament for West End and Bimini, David Wallace; Member of Parliament for West End and Bimini, Pakesia Parker-Edgecombe; Minister of Public Works, Desmond Bannister; and former Members of Parliament Verna Grant and Rev. H. Lindy Russell. (PHOTO: BARBARA WALKIN)
By FN Night Editor Barbara Walkin
After decades of intense agitation, finally the Fishing Hole Road Bridge/Causeway was officially opened on Friday (June 26), finally. Successive governments over more than five decades, up until the last two, failed to address a bridge at the key connection meaningfully.
The project which the Free National Movement Government, headed by Prime Minister Dr. Hubert Minnis, opened, was started back in 2015 by the Progressive Liberal Party Government.
Member of Parliament for West Grand Bahama and Bimini Pakeisa Parker-Edgecombe, expressed her pleasure at the overpass’ long awaited opening, particularly on behalf of her constituents in the Western District.
“I think it is a good day for residents of West Grand Bahama. We’ve had many people that would have voiced their concerns about the need for this causeway, and, to finally have it done after so many years, I think it speaks volumes for what we can do for West GB.
“It is always a concern, particularly now during hurricane time, whether or not we’ll be able to access Freeport, and, as I indicated in my speech earlier, this isn’t a 'want' this is a 'need' for us.”
The causeway is the only access for West GB residents to get into Freeport City.  Read more >>
Posted by Anthony Derek Catalano at 9:49 AM